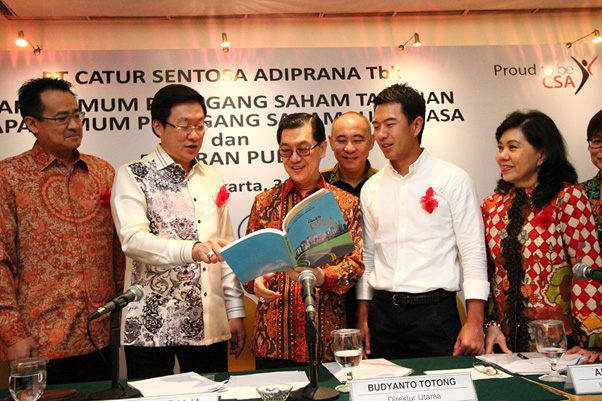 PT Catur Sentosa Adiprana, Tbk. (code: CSAP), optimize market for renovation and property in long term will still viewed potential industry as backlog housing in Indonesia has reached 13 million units. Company is very pleased with government during 2015-2016 responding on lack of this backlog where the government has created program called One Million of House and we see the potential impact on growth of Company’s business in distribution and modern retails of building materials and home improvement, Mitra10. Simultaneously government plan on infrastructure programs will stimulate other industries growth and demand. There also a potential in lower interest rate, stabilization in inflation and foreign exchange.

Company also view Indonesia’s large market shares on consumer goods needs, where we will more focusing on to improve network of consumer goods distribution as nationwide. In year 2016 the Company has targeting to grow 18%; where modern retail will contribute around 20% and distribution segment is contributing 80%.

Consolidated sales in 2015 achievement around Rp 7,8 trillion or 2% growth compare to last year. Contribution of distribution to sales around 70%, and retail modern was around 30%. Growth in modern retail around 13% while growth in distribution segment -2%.

In 2015 modern retail sales around Rp 2,1 trillion or 13% growth compared to 2014 sales. CAGR modern retail grows around 23% in 5 years, this segment became Company’s main focus on aggressive expansion in long term. Location will be crucial key for this segment. Mitra10 and Atria are current and future new trend of lifestyle shopping, which give promising potential business. Currently Mitra10 has 21 stores which 17 are superstores and 4 express stores, while Atria has 10 stores as 3 stores operate in Mitra10 stores.
During year 2015 Mitra10 has opened one store in Palembang. In 2016 Mitra10 is planning to open stores in Pekayon (Bekasi), Lampung, and BSD City (Serpong). Some targeted locations are being prepared and plan for next 5 years. While Company is focusing on expansion for new stores, also improving existing stores growth by adding new products, remodeling, improvement on inventory (be more efficient), and improvement on people development (training and certified).