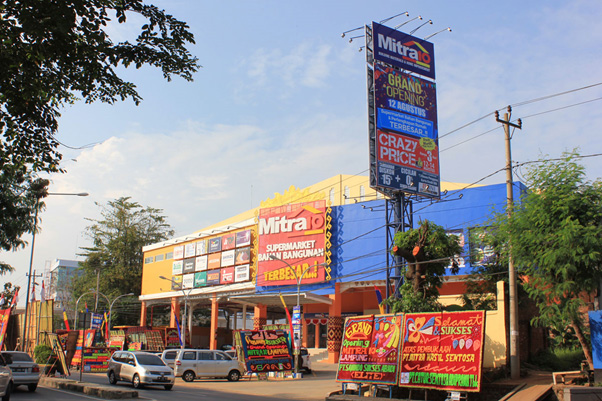 “This 23rd store opening is part of CSAP strategies on aggressive expansion in its retail segment of Building Materials and Home Improvement, especially in strategic and potential area to increase in sales volume.” Andy Totong (Chief Operation Officer of Mitra10) explained.

Selling space for Mitra10 Lampung is around 3.300 sqm on top of 4.730 sqm total areas with total investment ± Rp. 30 billion, where offer around 25.000 SKU. Sales target for this store around Rp. 6 billion by end of the year, it will increase contribution Mitra10 sales and CSAP.

Therefore in 2016 Mitra10 has opened two new stores, where first in Pekayon – Bekasi and now in Lampung which both stores categorize superstore type.

CSAP is targeting 50 new stores for Mitra10 by end of year 2020 to strengthen modern retail of Building Materials and Home Improvement in Indonesia. Locations will be more concentrate in Jabodetabek, Central Java, East Java, Sumatera, and Sulawesi.

Fund for expansion will come from Right Issues proceed which we received on June 2016 with total Rp 492 billion. Around 80% of proceed will be used for Mitra10 store expansion, through increased PT. Catur Mitra Sejati Sentosa’s equity, which subsidiary of CSAP with ownership of 99.82%. The rest of proceed will used for Distribution segment of CSAP.

Concept of Mitra10 Superstore is One Stop Shopping & Solution with convenience atmosphere. Consumer will not only feel comfortable they also able to choose varieties of products, where we have 65.000 SKU for Building Materials and Home Improvements to offer from ceramics, paint, household, and more with competitive price.
“Our target market is home owner who want to renovate their house. As our modern retail concept similar as supermarket type, customers will more convenience to choose varieties of products and price as they pleased.” Add Andy Totong.

In addition, Mitra10 also give interesting promotions such as discount in price on certain products where Mitra10 collaborate with Principal and Bank.

In the past six months, CSAP has achieved sales around Rp. 3,97 trillion or 10,5% growth compare to last year, Rp. 3,59 trillion. Distribution segment contribution around 71% to sales, will the rest contribution by modern retail.